It is a rather pre-conceived notion that we are the ‘cream of the nation’ when we see ourselves as part of the IITian community. True, we have toiled our way through a churning process to get into this Institution. Are we the cream of the nation is debatable though and this question always makes round of the media, people and everyone under the sun. It is interesting though to know about the making of our own insti which is one of the deemed ‘Institutes of National Importance’. We got an opportunity to dig a little into the history of IIT Bombay and got to know things that need to be shared. Why, you would ask? I don’t know! The sheer dedication and toil that has gone to make this Institute deserves to be at least a part of every student’s memory of the insti or just call it my urge to eke out some good old school gossip and stories from the insti. Well, that’s just my opinionated perspective that I am putting out in the open.

The first batch to graduate from IIT Bombay at its convocation on 22 December, 1962

The birth of IITB:

Let’s be honest for a while! The IITs were a result of the vision of Nehru’s vision of a newly independent India’s self-sufficiency in science and technology, both in industry and academia. Any IIT thus was a baby cradled in the bland appearing government policies and offices. The structure looks quite clear here. There must have been a plan, a sanction and the implementation. Who wants to read about this mediocre stuff, you would ask. What is exciting about committees and officials at work in a disciplined manner, you would ask. I beg to differ here. The story of IITB may come off as just another affair but what makes it unique is the dedication put in by the people here time and again to make it one of the premier Institutes in the world.

The foundation stone for IIT Bombay was laid by Pandit Jawaharlal Nehru on March 10, 1959.

The pristine and huge campus that we see today was not where we had started our journey. IIT Bombay was the second IIT to be established after IIT Kharagpur. The concerned committee was handed over with this campus well in advance but Powai was not the all vibrant and welcoming hub that is today, back then. A nearly inhospitable piece of land was to be converted to a fully functional campus and to add to it, the time frame, a period of 2 years back in 1958. The ever so enthusiastic planning officers, the then appointed director, with the support of the USSR mediated by UNESCO had gathered the people required to kick off a session. The construction though was nowhere near complete. The lab equipment for the Institute was coming from the Soviet nations and had already arrived at the Bombay Dockyards, and was prone to the impending Bombay monsoon. A temporary arrangement had become an alarming necessity now.

The solution to the looming problem came in the form of an agreement with the Silk and Art Silk Mills Research Association (SASMIRA) who offered a roof on the head of IITB for a period of 2 years. The first batch of students was admitted thus on 25 July, 1958 with admissions for undergraduate programmes in five disciplines: Chemical, Civil, Electrical, Mechanical and Metallurgical Engineering.

SASMIRA, Worli. The first residence of IIT Bombay for a period of two years

The insti, the bureaucracy and the whirlpools

The construction of our campus was fraught with its own obstacles. The incidents about which I write below are just examples of some governmental institution giving the other one a hard time. What’s notable though is the way these matters were handled by the figures of authority here. Again, the coming piece is just a set of some incidents and not a coherent timeline of the construction. We would fall short of space and attention otherwise!

The construction of the campus was not an easy job and was lagging way behind the timelines. One of the main reasons for the delay was that the works had been entrusted to the Central Public Works Department (CPWD), which hobbled by its own procedural idiosyncrasies, was taking its time over the whole affair. The communication between the people of IIT Bombay and CPWD used to be through letters and not phones, because ‘procedures’. A close look at some excerpts of these communications shows how deeply responsible were the people entrusted with the job here at IIT Bombay. This is a letter dated December 3 1958, written by Dr Kelkar, Deputy Director to the Senior Architect at CPWD, showing concern over the number of bathrooms in the wings of hostels.

“For 200 students, there are only twenty bathrooms, which means there is one bathroom per ten students. Giving an average of fifteen minutes per student this will mean two full hours will be required before all students have had their bath assuming that they all queue up for the two-hour period. This seems to me quite unreasonable and lack of bathroom facility might result in our having to change the time table of studies which, you would agree, is not at all desirable. I enclose here a drawing with the proposed changes. May I request you once again to treat this matter as very urgent”

The CPWD replied with a positive reply but the loop would go on for small changes and the cumbersome exchange of papers had to go on. This is just one example of several affairs where the deputy director or the director had to involve himself in this carousel of paperwork to get trivial jobs done. Taking matters into own hands, the meeting of the Board decided to hand over the project to a private architectural firm. But this decision stirred up another hornet’s nest altogether.

The first director of the Institute, Brig Bose even remarked that the CPWD did not take this decision in the proper spirit. The CPWD came up with their inventive ploys to hamper the construction. One such incident was when they hoarded the steel supply to IITB. Once every quarter a fixed tranche of steel bars, then a controlled item, were allotted to the Institute by the Calcutta based Steel Controller of India; what mattered critically was that these rations were routed through the CPWD. The CPWD began their counter-offensive by diverting the Institute’s quarterly quota of steel bars to a concurrently running project at the Government Printing Press in Nashik. The got intercepted before they could reach Powai.

A talk followed with the Calcutta Steel Controller, which resulted in only half of the help. Another arrangement had to made with Bombay’s Central Railways from where they could obtain odd sized bars heavily coated with old engine oil and grease, this adding to the chores of the workers to clean these bars.

The UNESCO report of 1966, reviewing IIT Bombay’s progress over the period of UNESCO-mediated support, summed up with impressive economy the flurry of construction activity following Brig Bose’s arrival: ‘At the beginning of the year, the Institute had come under vigorous direction of Brigadier S K Bose… Administrative and logistical hindrances were overcome or by-passed.’  I have covered a very little part of the logistical barriers in the above piece. There is a great deal of alacrity and dedication reflected by these small incidents that have gone on to make IIT Bombay what it is from scratch.

After the ordeal that the construction was, the Main Building classrooms were ready to receive their first students in July 1960. The first hostel to be constructed was Hostel 1 (The queen of the campus). The campus as we know it today has been a result of many years of bustling activity. 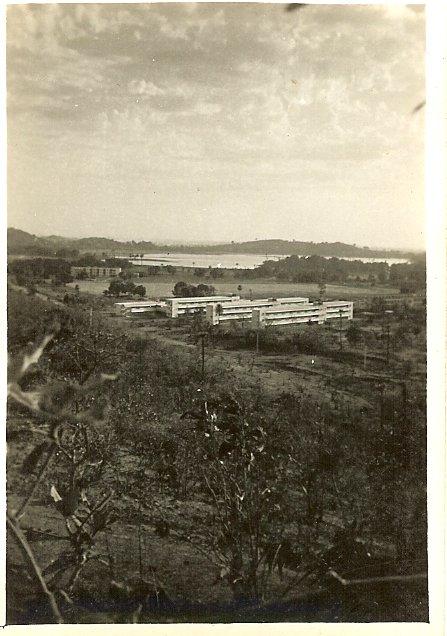 Hostel 1 (Queen of the Campus)

The campus was once totally un-greened and now has an abundant cover of trees. The departments as we know today were once housed in ‘Teaching-cum-Storage’ (TCS) sheds.

It is interesting to get to know how the students, the curriculum, the buildings and staff have evolved, adapted and toiled to make the IIT Bombay that we live in. I guess the knowledge of how much effort has been put up into making a place so dear to us, reinforces a sense of pride and responsibility in our head.

A study in contrast: The picture compares the campus of 1970 and 2004. Notice the different extents of greenery in both.

Most of the content in the above article is courtesy of Prof Rohit Manchanda, IITB. Contact us if you find any factual error in the information presented above.