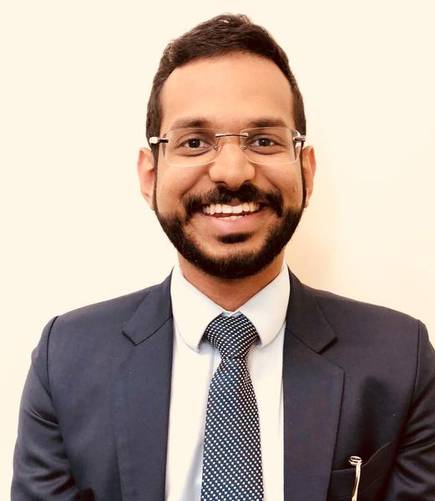 Once, there was a young man.
Like you, he sat in this very hall, walked this infinite corridor, slept under our hostel's roof, you see, to all the world, a student like any other.
His name: was Kishor Nayar

Today, of course, he is known all over the world by another name, which is why as we stand, looking out upon you all tonight, we’re reminded of an enlightening fact, every day, every hour, this very minute, perhaps, tipping forces and silver bullets attempt to penetrate this campus walls.
But in the end, that greatest weapon is you.
Just something to think about.

An alumnus of mechanical engineering IIT Bombay currently pursuing his PhD at Massachusetts Institute of Technology, Kishor Govind Nayar is featured in the Forbes 30 under 30’ Class of 2019, in the Energy section for his current work in developing a desalination technology that shows promise in various sectors like saving greenhouses fertilisers, making salt production cheaper, increasing lithium recovery from lithium mines, and enabling more efficient oil extraction.

‘Forbes 30 under 30’ is an annual encyclopedia of creative disruption featuring 600 young stars in 20 different industries, set of lists issued annually by Forbes magazine.

Kishor has pursued his bachelors at IIT Bombay in Mechanical engineering with honours. He has also pursued his minor in Energy Science and Engineering. While his stay at IIT Bombay, he was an undergraduate researcher and worked under the guidance of Prof. Milind. V. Rane at the Heat Pump Laboratory developing novel heat exchangers for Heating Ventilation and Cooling HVAC systems. He had also filed a patent as part of his research. He pursued his summer internship at University of Orlando Institute of Technology where his research focussed on designing thermodynamic cycles for power generations and an another one at Nanyang Technological Institute where he worked on implementing a technique to align Silicon Dioxide nanowires using micro fluids.

Apart from this he also pursued debating while his stay here. He was the Debate secretary of Hostel 4 and part of the IIT Bombay Debate Society. He also volunteered as a coordinator at Techfest the technology fest of IIT Bombay and Mood Indigo, the cultural fest of IIT Bombay.

After graduation, he pursued his masters in mechanical engineering at MIT followed by a PhD under the guidance of Prof. John. H. Lienhard working at the Rohsenow Kendall Heat Transfer Laboratory where his research comprises of studying thermophysical properties of seawater, developing systems for seawater desalination through electrolysis and Intelligent Selective Electrolysis Systems.

In his own words “Seawater property characterization was what I started my work at MIT in 2012. Thanks to the good resources at MIT, could rise to the top of that field. About 100 journal paper has cited that work. Close to 30,000 people have visited the MIT website where we distributed the software free of charge. The IAPWS, an international standards organization for water and seawater properties, recognized my work and invited me to their annual meeting at Kyoto in Japan in 2017. At 26, Kishor Govind Nayar was the youngest person in the Seawater Properties Committee and the first Indian citizen on it.

We congratulate Mr Kishor Nayar for adding yet another coruscant feather to his cap and filling the entire IIT-B community’s chest with pride worth boasting about, and we wish him the very best for all his future endeavours.